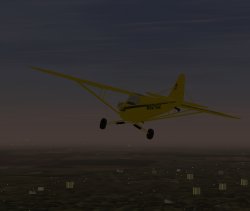 Yanni + FGFS. Well.. Not so new actually. A couple of days ago after long I talked to TiK (a.k.a Kartik N a.k.a BLUG co-ordinator). His telling about his wanting to try out my EGL scenery in FGFS resulted in another burst of interest in FGFS. Though I did try out some modding (this time unsuccessfully) most of the fun was flying around over Bangalore most of the day. By evening sun was setting (in FGFS also). I took a Piper J3 cub and flew around. All this with a few of Yanni’s stuff playing in the background. A model bug made J3 feel like a glider with landscape showing up through the door and all. It was b.e.a.utiful. At some point I was enjoing the landscape and I started swinging the aircraft to the music. Soon I was almost hypnotized (remember dozing off, mid air, with the stick in my hand – good that its a flight sim). 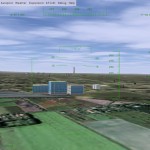 A Screen shot (Oh the PUB is in the background)

I added EGL to the bangalore scenery. Its pretty close to the VOBG runway (09 – end). Bizzare that I actually put it only when it has become my ‘previous’ office. I remember making an attempt to put in the Residency road office but too much detail blew my interest. By the time I got it to some shape it looked like some fancy hotel (on similar lines as the hotel that looks like a basket). 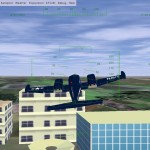 Another one (Look at the eatery).

I pulled it out, if you are thinking about where the plane went after I took the second screen shot.

Untar the archive publdg.tgz into the scenery tile directory e070n10/e077n12/ (of course you should download the e070n10 scenery and append the first line of the publdg.stg file to 4217276.stg file in the same directory. The Bangalore airport (VOBG) spec found in the SouthInd.apt file.

Its after quite a quiet period that I tried Flightgear (except once while checking the GeForce muscle when I got the new squarehead). So much has changed; Lot to unlearn and learn about the data file(s) (which has grown to 84 MB from the ~30 MB a couple of years ago). Things I noticed are:

I also visited X-Plane site and sorta felt sorry about it. They have beautiful rendering of the landscape. An enviable amount of detail in the terrain texture (*sob* when would I see that in Flightgear). Browsing through the flight-sim pages I also reached LO-MAC site. Another drool piece for me (*sigh* when would somebody make a combat-sim out of flightgear engine).

Watched Shawshank Redemption after its being in the movie hit list for (quite) some time. Moderately tickling, I would say. I had too much of an anticipation getting it (mostly from my friends’ comments).